A NASA spacecraft has sent pictures showing itself in good condition after making the first successful landing in a polar region of Mars.

The spacecraft Phoenix landed in the northern polar region today to begin three months of examining a site chosen for its likelihood of having frozen water within reach of the lander’s robotic arm. Radio signals received at 6:53:44 p.m. (Texas/ Central Standard Time) confirmed the Phoenix Mars Lander had survived its difficult final descent and touchdown 15 minutes earlier.

The signals took that long to travel from Mars to Earth at the speed of light.  Mission team members at NASA’s Jet Propulsion Laboratory, Pasadena, Calif.; Lockheed Martin Space Systems, Denver; and the University of Arizona, Tucson, cheered confirmation of the landing and eagerly awaited further information from Phoenix later tonight. From the initial information sent from Phoenix, the site appears to be what exactly what they thought. Now, it’s time to go find the ice.

“We see the lack of rocks that we expected, we see the polygons that we saw from space, we don’t see ice on the surface, but we think we will see it beneath the surface. It looks great to me,” said Peter Smith of the University of Arizona, Tucson, principal investigator for the Phoenix mission.

“Phoenix is an amazing machine, and it was built and flown by an amazing team. Through the entire entry, descent and landing phase, it performed flawlessly,” said Ed Sedivy, Phoenix program manager at Lockheed Martin Space Systems Company. “The spacecraft stayed in contact with Earth during that critical period, and we received a lot of data about its health and performance. I’m happy to report it’s in great shape.”

Phoenix uses hardware from a spacecraft built for a 2001 launch that was canceled in response to the loss of a similar Mars spacecraft during a 1999 landing attempt. Researchers who proposed the Phoenix mission in 2002 saw the unused spacecraft as a resource for pursuing a new science opportunity. A few months earlier, NASA’s Mars Odyssey orbiter discovered that plentiful water ice lies just beneath the surface throughout much of high-latitude Mars. NASA chose the Phoenix proposal over 24 other proposals to become the first endeavor in the Mars Scout program of competitively selected missions. 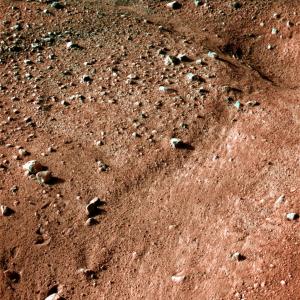 For more about Phoenix, visit http://www.nasa.gov/phoenix .