Is this the New Poster for JJ’s new movie? Maybe so…Maybe Not… Either way, next year’s sequel to J.J. Abrams’ 2009 “Star Trek” reboot officially has a name: “Star Trek Into Darkness.” 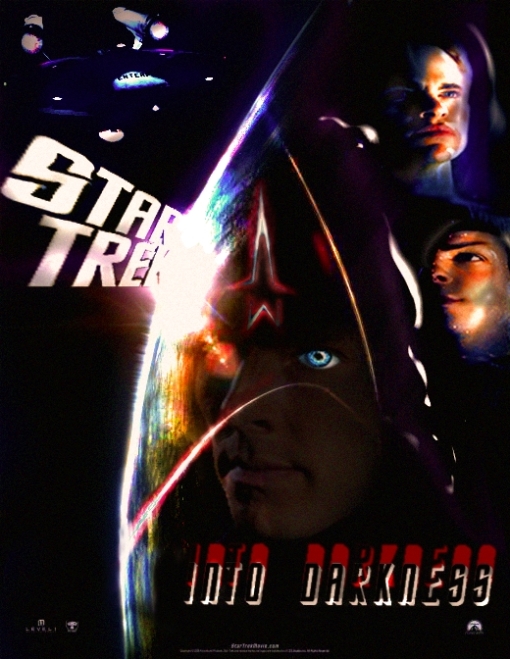 According to IFC,  the title will deviate from the previous series’ sequel-naming formula by omitting the colon previously used in titles like “Star Trek II: The Wrath of Khan,” instead going into territory that the “Dark Knight” and “Die Hard” have explored before. Damon Lindelof, who co-wrote the script with Alex Kurtzman and Roberto Orci, had previously promised that the sequel title would drop the colon.

“There have been more conversations about what we’re going to call it than went into actually shooting it at this point,” he told MTV News at Comic-Con,  adding that it can’t be “Star Trek 2″ because that’s what “Wrath of Khan” is technically called. “That was the genius of Nolan. There was ‘Batman Begins,’ and now they’re just going to be the ‘Dark Knights’ and not going to have 2′s. It’s hard to do movies without colons.”

He added, “There’s no word that comes after the colon after ‘Star Trek’ that’s cool. Not that ‘Star Trek: Insurrection’ or ‘First Contact’ aren’t good titles, it’s just that everything that people are turned off about when it comes to ‘Trek’ is represented by the colon.”

“Star Trek Into Darkness”flies theaters on May 17, 2013. In a June interview while promoting their drama “People Like Us,” Kurtzman and “Star Trek” star Chris Pine gave me a hint of what to expect in the sequel:

“What was really kind of fun for all of us on the first movie is that we basically got to show the bridge crew coming together. And I think that the mistake that we didn’t want to make in the sequel was assuming that just because they’re together they’re the finely tuned machine that you fell in love (with) from the original series. They still have a lot of work and a lot of growing to get to that place,” Kurtzman said.

“So it’s a lot of fun I think to watch the characters struggle through a lot of insanely huge challenges. I can certainly speak to the scope of the movie — and as big as the first one was, the second one’s even bigger. And the key for all of us was making sure we were holding on to character the whole time, but I think it’s gonna be a lot of fun.”

“I think the (special) effects and explosions are just as great if not greater in this new installment, but I think it’s matched by really strong and really interesting character development.”