If Time Were Really on His Side, Michio Kaku Would Go From the Big Bang to the Big Picture

Michio Kaku is the co-founder of 11-dimensional “string theory,” which is either a Nobel-worthy “theory of everything” or unverifiable poppycock, depending on whom you talk to. His latest best-selling work is “Physics of the Impossible.”

You describe time travel as a “Class II Impossibility” — at the very edge of our understanding of the physical world. But then you mention that physicists are unable to find any physical law that makes time travel impossible. What are the top three times you’d want to go to and why?

I think every physicist would like to witness the instant of creation. The Big Bang. Normally we’d like to do this from a safe distance.

But there isn’t one.

That’s a problem, right. Because the universe was quite small back then, and if we were inside the universe, we too would be quite small. And we too would be bathed by an enormous flux of radiation. But assume for a moment that it is possible to look at it from another dimension. That would give us a bonanza of information about the nature of the universe. Now if I had a second choice, I would like to meet Isaac Newton at the height of his creative powers. 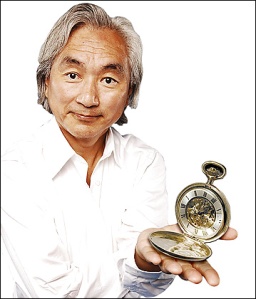 Did the apple tree exist?

We do think that when he was 23 years old he saw an apple fall, and then he asked the key question — if an apple falls, does the moon also fall? And he came to the conclusion yes — the moon is in free-fall. And then you could calculate the motion of the moon using his new law of gravity. That’s what he did when he was in his 40s. In about 18 months, in one of the greatest outpourings of intellectual genius the world has ever seen, he wrote down “Principia” — basically the laws of the planets.

Now, a third thing, if I could, I would like to see beyond my years, maybe like 100 years in the future, when we have a theory of everything. This is my life’s work, right?

What you basically want to know is whether you’re Einstein.

Well, we want to know whether we wasted some of the best years of our life, okay?